Cat Nolan and her friends were talking about what they aspired to do when they grew up.

One friend said, “Catherine’s going to be a professional soccer player.”

About a decade later, yes, she is.

“Wow, it turned out I am,” Nolan recently said.

Like many young athletes, Nolan had visions of playing professional soccer, although only a few make it. “I never knew it would be able to happen,” she said.

The former Center Moriches High School standout and Johnson & Wales University midfielder will be heading to play for F.C. Dornbirn 1913 in Austria next month for an opportunity of a lifetime that she could not refuse.

Her contract with the club runs just under two years. She will receive free room and board, 300 Euros a month stipend and 50 Euros for each point accrued and goals scored. And, that also includes two round-trip tickets from the U.S. to Austria.

Now, that might not sound like that much compared to other pro deals, but when you add in a year’s tuition at an Austrian college in which Nolan can pursue her master’s degree to become a physical therapist, it is a great deal.

“I think it’s a great opportunity,” Nolan said. “Who knows where this will take me? The contract I have is for a little bit under two years. Hopefully, other teams will see me playing with them and hopefully I stand out. Maybe I will keep on going and further my soccer career onto bigger and better things.”

Let’s put this into proper perspective. Nolan, who turns 22 on Feb. 26, wasn’t looking to turn pro. She was ready to pursue a fulltime job after completing her senior season at Johnson & Wales in Providence, R.I. 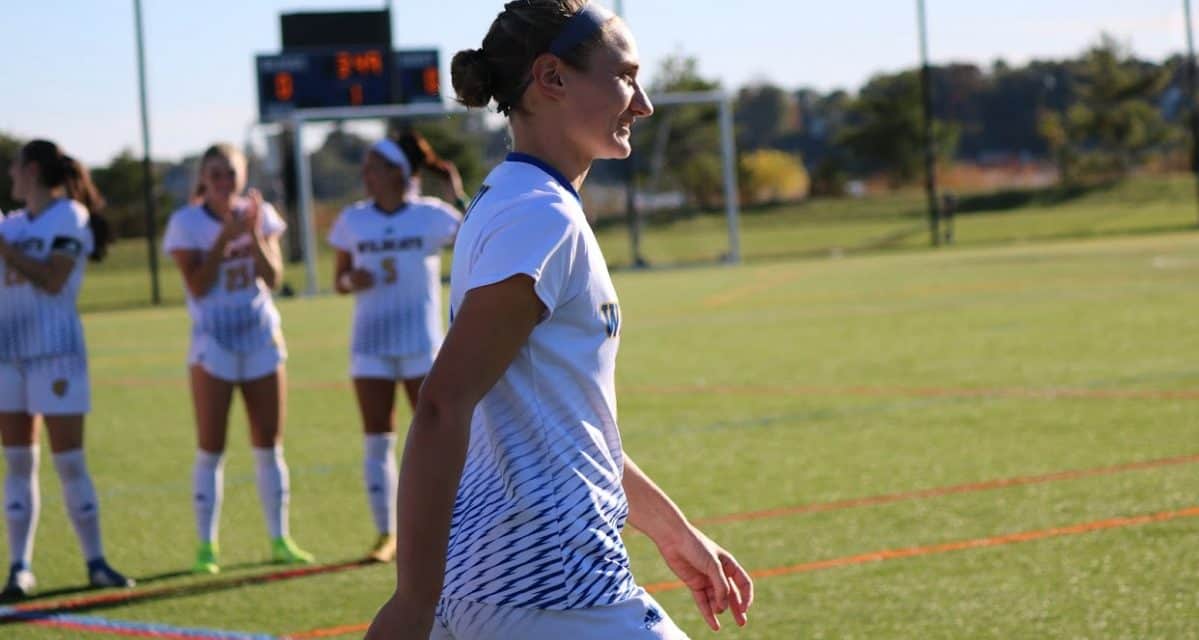 Zef Kabashi on Cat Nolan: “She reads the game very, very well. She has good anticipation in terms of when to step and tackle the ball. She is very dynamic on the ball.” (Photo courtesy of Cat Nolan)

Sometimes life’s pathways take us to some journeys we did not plan to take.

David Harris, a Long Island Soccer Football League board member who is the manager of the PDB Soccer Academy who knows of many college soccer players from Long Island, put out his annual call to players to perform for the Under-23 team.

“We were trying to give as many players as we could opportunities if they were interested and motivated to come,” he said. “We tried to cut back on the schedule to get a game once a week and train once a week because a lot of the players were busy with work and classes and different things they are doing over the summer, like internships.”

Nolan answered the call and Academy owner and team coach Zef Kabashi very quickly he realized he had a special player in the midfielder.

“She reads the game very, very well,” he said. “She has good anticipation in terms of when to step and tackle the ball. She is very dynamic on the ball. She can change direction, see the whole field, change the point of attack. She can shoot, she can score. She can get forward; she can come back and play defense as well. So, she is very good at transition and she’s dynamic in tight situations with one or two opponents around her. She can get out of it.”

Harris said that Nolan had “all the qualities you want to have in a midfielder, without a doubt. A good motor, a good energy level. Gets forward, gets back, Good passer of the ball. Can move forward as needed to support the attack. definitely, a classic box-to-box type midfielder, an essential quality that anyone who follows the game would be looking for from a midfielder.”

So, Kabashi invited a coach he knew who had connections with Dornbirn, an Austrian second division club that wanted to add three Americans to bolster its roster. Managing director Werner Brunold has aspirations of gaining promotion to the first division and competing in the women’s UEFA Champions League.

He was asked if had anybody fitting the bill and he invited his contact to watch her play against Brentwood.

Kabashi said he told Nolan: “I would take it with an open mind. It’s a beautiful city. It’s close to Switzerland. There’s no crime there. It’s very nice.”

“I am looking for one more player, a striker,” Kabashi said. “So far, I’ve got two girls going there, which is good because i wanted at least one or two to join Cat to have Americans there for comfortability reasons.” 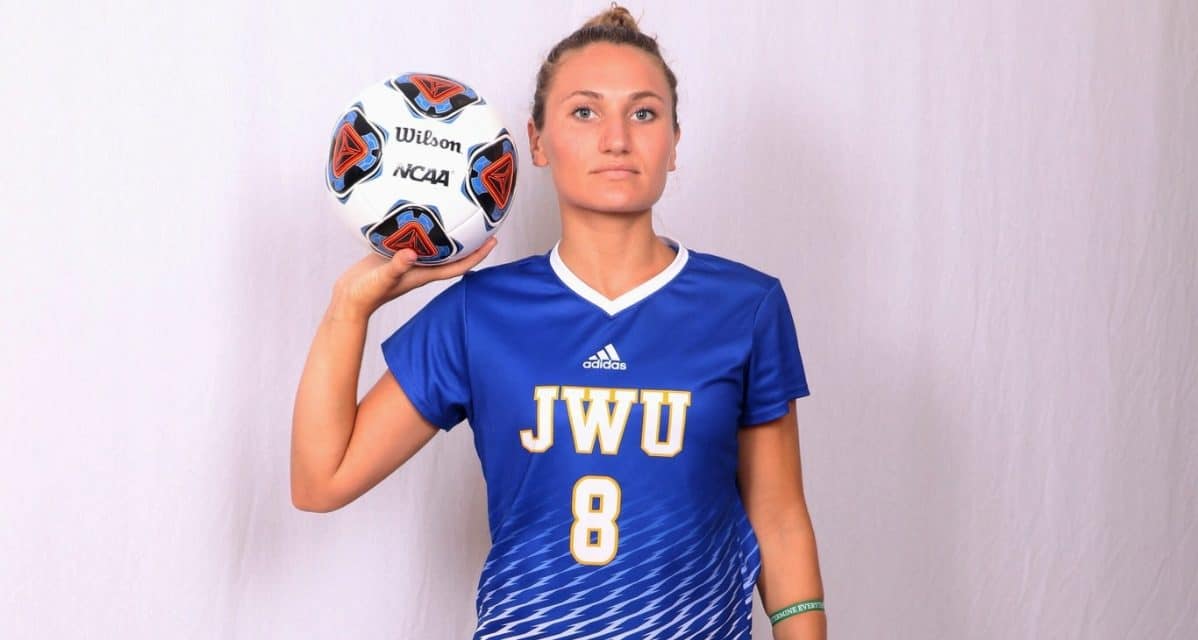 Cat Nolan on Zef Kabashi: “Zef pushed me to keep my surroundings in check. I already have a good vision of the field, but he made it better by fixing the little things. He also really emphasized the patience of the game, to attack at the right moment.” (Photo courtesy of Cat Nolan)

“I told the girls you go to Austria, you stay there,” he said. “If you like it, great. You can grow there. If there is any reason you want to move on, I do have contacts in Italy, that I can get you into a team there. It’s a hot commodity for international teams getting American players on the women’s teams, not so much in the men’s game.”

At first, Nolan admitted she was a bit skeptical about the possibility of playing overseas.

“I thought it was fake. I thought it was going to fall off,” she said. “Let’s see where it goes. All of a sudden, I get my contract from Werner. I will be staying with him and Carina, his daughter, in their house. It’s crazy. It all came on really fast.

“It literally came out of nowhere. Nothing like this has ever happened to me before. Whoa!”

Carina is also a member of the Austrian U-19 women’s national team.

“It’s a game changer for her,” Harris said. “It’s a complete win-win. I don’t think a master’s degree from Austria will be hurting her too much in an way in terms of her career. I think it will help her quite a bit.”

Nolan’s time with PDB Soccer Academy was well spent in so many ways. Beyond the F.C. Dornbirn 1913 connection, it helped develop her into a better all-around player.

“Zef pushed me to keep my surroundings in check,” she said. “I already have a good vision of the field, but he made it better by fixing the little things. He also really emphasized the patience of the game, to attack at the right moment. That taught me to calm down with the ball at my feet and make the simple decisions until the team was set to attack. I believe Zef’s insight had a huge impact on my senior season at JWU.”

“She plays as a No. 8, sort of an inside midfielder, but she can play in the holding role,” Kabashi said. “She can play center back. Her game insight allows her to be in any different position if the coach needs her to be because she reads the game well. She understands the game from a tactical perspective very well.” 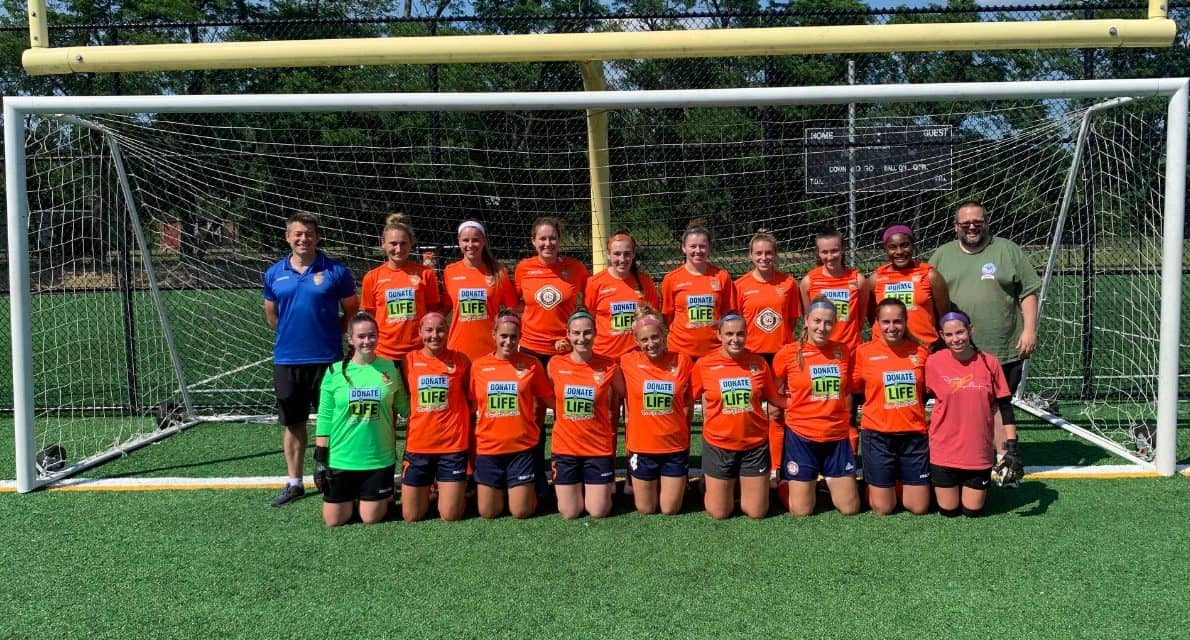 Zef Kabashi is standing back row left, Cat Nolan is next to him. David Harris is standing at the far right. (Photo courtesy of Zef Kabashi)

Nolan started playing soccer at the age of five with the Smithtown Kickers before her family moved to Center Moriches. She also competed with the Patchogue-Medford Soccer Club before performing with Center Moriches SC.

“I just love it,” she said. “Playing is fun. I just stuck with it. I didn’t want to quit ever. Once I got this opportunity after college to continue playing, I just took it because i didn’t want to stop.”

Her early hero was the legendary Mia Ham. “My mom always talked about Mia Hamm, so I grew up with the aspiration of being like Mia.”

Now, Nolan, is a “big fan” of U.S. international midfielder Julie Ertz. “She’s really good. I want to be as tough as her,” she said.

The rest of this month will be quite a whirlwind for Nolan. She graduates from Johnson & Wales on Feb. 27 and departs for Austria on March 5.

While finishing up her studies, Nolan has done as much research as she could via the internet, whether it was background on the team or trying to find video. Players already have contacted her.

“I am pretty good with time management and doing my work and getting things done and also having time for myself to train and getting ready for this whole transition,” she said.

And why not? It’s an opportunity of a lifetime.