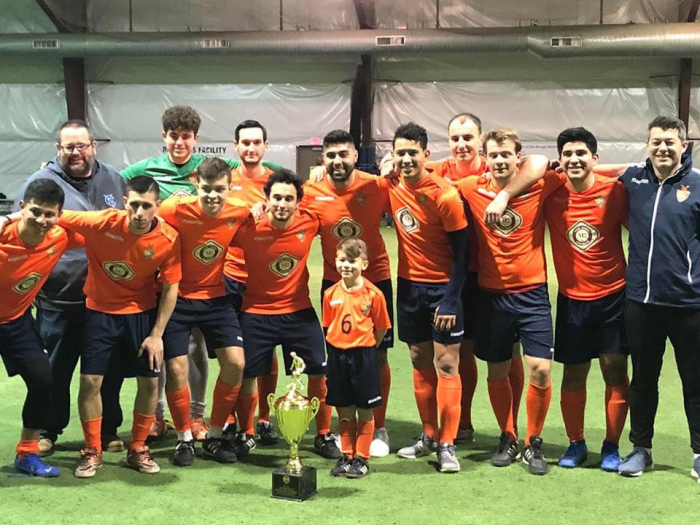 UNIONDALE, N.Y. The PDB Irish Rovers’ victory in the Joe Goldberg Long Island Soccer Football League indoor tournament was just another reminder that a game isn’t over until it’s over.

With eight seconds remaining in the Division 2-3 final, Irish Rovers was trailing the Guyana Jaguars Juniors, 1-0.

With 7.8 seconds left in the game at Global Soccer at the Mitchel Athletic Complex, it was all knotted up at 1-1 thanks to a goal by Niko Jelicic. Irish Rovers went on to win the title via penalty kicks, 3-1.

“That’s why you always play to the last second,” Jelicic said. “Try your best. Regardless of letting in a weak goal seconds before, you’ve got to try to stay positive as best as you can. Take a deep breath and keep playing.”

PBD did not have much time to stage a comeback. Guyana had grabbed the lead with only 2:18 left in the match.

“When you’re trailing 1-0 against a good team like that, it’s not necessarily doing it by making subs,” Irish Rovers head coach Zef Kabashi said. “The guys got to do it themselves. They’ve got the responsibility on the field to make those decisions. Sure enough. The guys we all believed that we all could make it to PKs and win the final and we did. It was a matter of belief in themselves and each other and that’s how they pulled it off.”

As the clock was winding down, Jelicic and company did not give up. With 22.7 seconds remaining Irish Rovers attempted a free kick that was cleared off the line by a Guyana defender.

The ball eventually came to Jelicic, who fired a hard, 20-yard shot with but 7.8 seconds to go in regulation.

“I took a shot at the end, hopeful, wishful thinking more than anything, just get it on net,” he said. “It ended up being a very nice goal, had the momentum, and took them to penalties.

“Head down, just what they taught us in grass roots and just put it on net.”

Which Jelicic did. In fact, he converted his shootout attempt as did two teammates to win the trophy.

In group play, Guyana defeated Irish Rovers, 4-1. The losers learned something about the defeat, its only loss in the tournament.

“We stayed a little more compact, stay connected and the instructions were to shoot from distance,” Kabashi said. “And the opportunity came and sure enough, the goal that took us to PKs was from distance.”

Added Jelicic: “We played the team in the final that we wanted to. They beat us in the first game, so we learned our lessons. We took our licks.”

So, what did Irish Rovers learn from the first encounter?

“We were too stretched,” he said. “They were much more contact. They were able to counter on us without really having to do that much. We were giving the ball away, forcing a lot of it. This game, just wait for them to come out a little bit, try to make 2 v 1s when we could, make some space and take them on goal when we could. We had lots of shots on goal, which was good, but their keeper was really good.”

Kabashi, whose six-year-old son Lucas Paul (a member of the teams Under-8 Academy side), posed with the team and Jelicic for photos during the post-game ceremonies, said he decided to move the team down a division after winning the Premier League and Premier League Cup last year.

“We dropped to D-2 due to the roster size. We wanted to make it more enjoyable instead of having two rosters; slimmed it down to one roster. We train two days a week and we have fun, enjoy it on the weekend. Instead of hanging around for two games, we hang around for one game and play quality ball.”

“They’re a good team,” Kabashi said. “They’ve played together for a long time. You can tell. Their chemistry is very high level. We knew we were going to see them in the final, after we lost to them in the first round.”